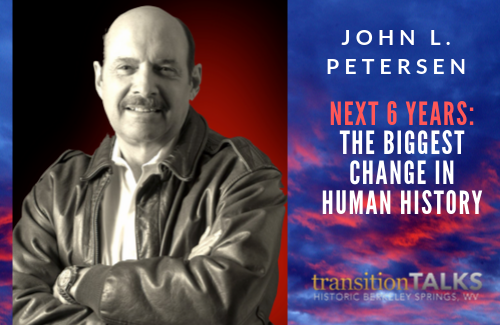 An increasing number of psychics, seers and futurists are coming to the conclusion that the events and changes that are headed this way in the next nine years are going to so disrupt life on this planet that it is likely not to be recognizable in conventional terms. We are about to experience the most profound shift in the history of the planet. This is the transition that indigenous, religious and ancient prophets have all cataloged – and the result will be the emergence of a new human and a new planet.

Few people are more qualified to take you down this path than futurist John Petersen, who has been studying this epochal transition for more than two decades. Using a systems approach, he will outline the convergence of cosmic and planetary events with worldwide shifts, exacerbated by amazing technological and scientific breakthroughs – that, for example, will eliminate an estimated 80% of current jobs within the next 15 years – to say nothing about the emergence of a fundamentally new, cosmic human that is actively engaged with the other civilizations that inhabit this neighborhood in our galaxy.

So buckle up your seat belt, for It’s going to be an extraordinary ride! You will absolutely want to be able to understand what’s coming so that you are not surprised. Amazing opportunities lie within this shift that directly relate to your very purpose in life and the meaning of the human experience. John will offer concrete suggestions about how to prepare for this change and the new world that appears to be inbound.

Mr. Petersen's government and political experience include stints at the National War College, the Institute for National Security Studies, the Office of the Secretary of Defense, and the National Security Council staff at the White House. He is a decorated veteran of both the Vietnam and Persian Gulf wars. He has served in senior advisory, fundraising and policy positions for a number of presidential political campaigns and was an elected delegate to the Democratic National Convention in 1984. He was twice the runner-up candidate to be Secretary of the Navy.

An award-winning writer, Petersen has written three books. He has also written many articles and papers on different aspects of the future including national security and the military, the future of energy and the future of the media. His current book, A Vision for 2012: Planning for Extraordinary Change, presents a systems approach for preparing for big change whether from the perspective of a government, organization, or individual.